History of the Faculty of Medicine

Here is the history of Tottori University Faculty of Medicine:

On March 27, 1945, a formal decision was made to establish Yonago Medical College due to the revision of the system for schools under the direct control of the Ministry of Education. In those days, the Ministry of Education, which was in a hurry to increase the number of medical colleges to train army physicians, scouted possible sites in the Sanin Region on condition that 300-bed class hospitals, public corporations, and 8000 tsubo (about 2.64 ha) of land would be locally provided. According to Mr. Kenji Tsuruta, Manager of Instruction, who first received an inquiry from the Ministry of Education in Tottori Prefecture, Tottori City, which had suffered catastrophic damage due to a huge earthquake in 1943, had no capacity; Yonago Hospital was selected as the only and most suitable site in the prefecture, and the Tottori Prefectural Assembly unanimously approved Yonago City.

On July 1, 1945, the enrollment ceremony for the first students to enter Yonago Medical College was held with Mr. Mitsuzo Shimoda as the first principal and the basis of the Faculty of Medicine, Tottori University, was laid.
Yonago Medical College initially used Yonago Prefectural Giho Elementary School and the private Seika Girls’ School as its school buildings. 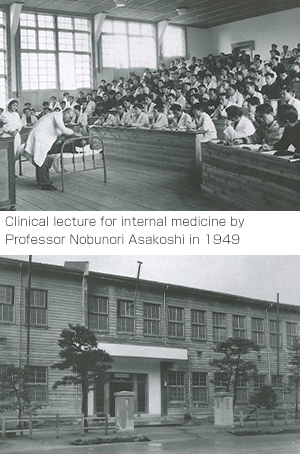 Yonago Hospital, which had had a long history since the Meiji Era, was transferred to Yonago Medical College to become its affiliated hospital in June 1946. However, there was a nationwide movement calling for the abolition of poorly equipped medical colleges that had lost their purpose of training army physicians, and the Ministry of Education made a decision to promote medical colleges whose physicians were appropriately qualified to medical universities and to abolish medical colleges whose staff were poorly qualified. Tottori Prefecture campaigned strongly for promotion. Persons involved, including Principal Shimoda, went to Tokyo by train (a journey of over 20 hours each way) and made repeated representations to the Ministry of Education. As a result of these efforts, the government, who was expected to settle the issue politically, decided to promote Yonago Medical College to the status of medical university and formally authorized the establishment of Yonago Medical University in February 1948. Yonago Medical College was automatically abolished in March 1951.
Yonago Medical University held its first enrollment ceremony on May 4, 1948, and a total of 23 students arrived in Yonago as local university students. 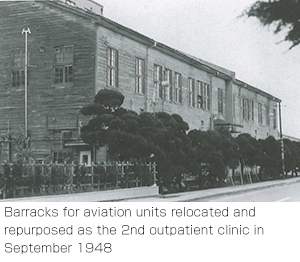 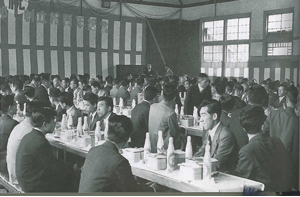 In 1955, a commemorative ceremony was held in the 2nd clinical lecture hall, and memorial events were held to present the status of development within and outside the University, including academic meetings, an exhibition of the University’s bulletins, and the issuing of collections of achievements by Faculty of Medicine on its early days and the departments.
In addition, Tottori University Faculty of Medicine produced its first graduates that same year. 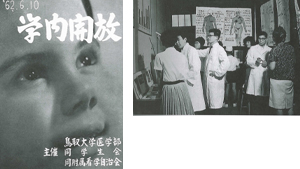 Beginning in 1957, an open campus event (later developed into a Medical Fair and subsequently Nishiki-sai) was conducted by university students and the student council every other year, in principle. In those days, clear descriptions of various diseases such as cancer and diabetes provided by students under the instruction of instructors were very highly regarded, partly due to the limited medical information provided by the mass media. During the open campus event in 1962, over 3,000 citizens visited the University.

Development and enhancement of basic research buildings and lecture buildings 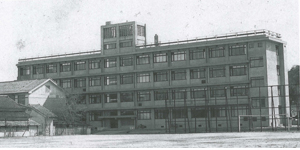 During the period from 1965 to 1975, buildings of wood and plaster for departments of basic medicine were demolished one after another, and the building complex of Faculty of Medicine and its surroundings apparently changed. 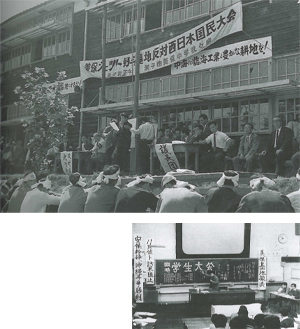 Beginning in 1966, class boycotts started, and the University issued warnings to students and imposed disciplinary action as a result. In 1966, although new student dormitories were constructed, the student council directly opposed the University over the selection of dormitory users and their rules of management. In the context of these frequent riots, various strategies to promote communication between students and the faculty council were considered, and the “Tottori University Faculty of Medicine Times” began to be published. 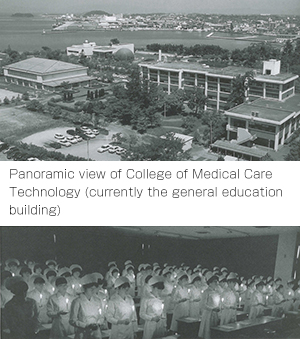 In 1975, the Tottori University College of Medical Care Technology was established with the purposes of teaching and researching the expert knowledge and advanced technological functions of nursing and clinical laboratory testing required with the increasing sophistication and segmentation of medical services and of nurturing professionals who have a well-rounded personality and wide-ranging education and can contribute to improvements in public healthcare.

In 1975, the “Mitsuzo Shimoda Memorial Prize,” a prize awarded to young researchers belonging to our Faculty of Medicine, was instituted as a part of the memorial project for the 30th anniversary of our foundation. The prize was named after Professor Mitsuzo Shimoda (with his consent), who made significant contributions to the development of the University as Principal, President, and Medical Director in the early stages of its establishment. The foundation that administers the prize is funded by donations from the alumni association and a large amount of contributions from the family of the late Professor Shimoda.

Passing away of Professor Mitsuzo Shimoda 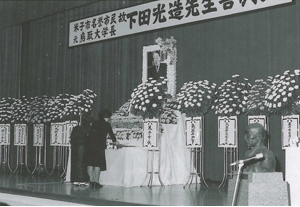 In 1978, Professor Mitsuzo Shimoda, who can be viewed as the founder of the Tottori University Faculty of Medicine, passed away at the age of 93. The funeral was conducted in the Medical Faculty Memorial Hall as a joint funeral by the Faculty of Medicine and Yonago City. The funeral was attended by a large number of people, including psychiatrists from all over Japan and the mayor of Yonago City.

By 1985, over 2,600 graduates had been produced since the University opened, and the building complex was reinforced and equipped with many advanced instruments.
In addition, as a part of the memorial project for the 40th anniversary of foundation, a panel discussion titled “Future of the Tottori University Faculty of Medicine” was held. Various panelists, such as the Yonago City Mayor, the Chairman of the Chamber of Commerce and Industry, the President of the Tottori Medical Association, the Medical Director, and the Hospital Director, spoke about the current conditions of the Faculty and exchanged opinions about strategies for development. In addition, a new logo was adopted as a part of the memorial project.

From Steroid Research Facility to School of Life Sciences

A group of substances that can be found in living organisms and are collectively called “steroid compounds” have been administered as effective treatments. “Yutan (bear bile)” is one that has long been used in Japan, but its medical rationale has been poorly understood. In 1966, the “Steroid Research Facility” was established to advance research on the biosynthesis and metabolism of steroid hormones. In 1990, the Steroid Research Facility evolved into the new department of the School of Life Sciences with new potentials and ended its 27-year-long history. 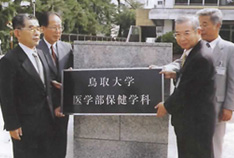 In 1999, based on a review of the future social situation and the future of the University, Tottori University College of Medical Care University was reorganized into the “School of Health Science” within the Faculty of Medicine. Negotiations with the Medical Education Division, Ministry of Education, Culture, Sports, Science, and Technology for its establishment were held prior to the establishment of the School of Health Science and a unique educational curriculum to respond to the issues of aging population and international medical care was implemented.

In 2005, the commemorative ceremony for the 60th anniversary of our foundation was held. A new logo was established as a part of the memorial project.

In 2015, the Tottori University Faculty of Medicine marked the 70th anniversary of its foundation.